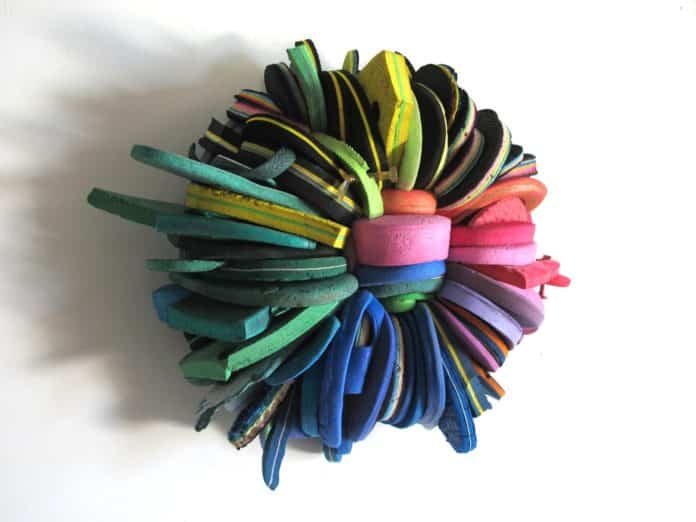 The new exhibition “Escales” curated by María José Cosano opens up at Wadström Tönnheim Gallery on Friday, July 19, and will go on until August 16. One of the meanings of scale is to be an ordered succession of different values of the same quality. In a sense, there is no doubt that the scale helps us to define the useful and other concepts more as we will see from the work of the artists participating in this exhibition.

Javier Map draws on the landscape as an object that has a utility, what is that utility? Do you meet it now? These are questions that arise with his work, in which he gives us the object not only as a port of artistic meaning but also as a tool that serves or is part of something. The work of Antonio Mena asks us: can we change the scale of the object, its quality, its class, the space to which it previously belonged and can we assign it another meaning? In the series “Accumulations” the artist reuses objects such as “flip flops” collected in the mouths of the rivers of the coast of El Salvador and reuses them and transforms them into works of art.

In the case of Tonia Trujillo, the question would be: For whom is the object useful? In “Mar de pinchos” the artist opens the borders to others: the disinherited, the humiliated, the exiled, the stateless, and forces us to position ourselves on what side of the answer are we?

Scale as time can be seen in the works of Nina Nolte that uses the months as a unit of time (I’ll remember April), time limits us as beings, gives us duration, marks our history.

On the other hand, Juan López López with his work makes us wonder: What is the validity of gender as a scale? Is gender binarism, the masculine and feminine, a useful scale for the human? In the work of Maria-José Gallardo, the scale is different, it is organic, relative to the animal, to the vegetable, in short, to the living, in addition, the artist does it with the profusion of the elements, reaffirms herself in the vital.

In any case, so many previous works like those of Mónica Vázquez Ayala raise temporal or infinite scales, bodily, organic, aesthetic that lead us to follow paths following other scales, ours.

Address and opening hours: Poligono Nueva Campana, Local 37B, Nueva Andalucia (Marbella). Open Monday to Friday 17.00-20.00 or by appointment. The exhibition will go on until August 16.