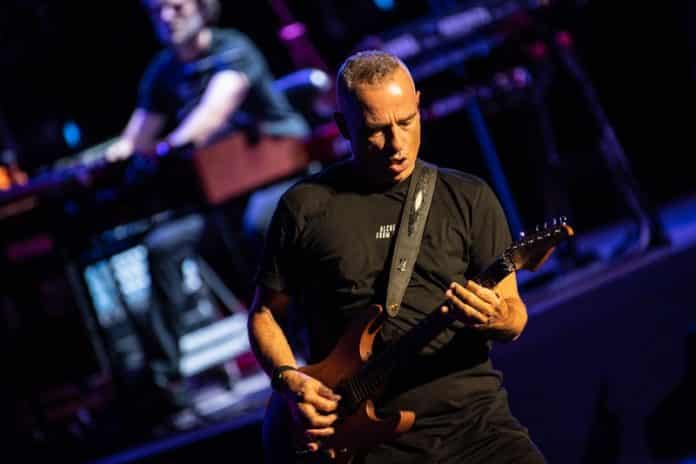 As Eros Ramazzotti says in his song “Si Bastasen un Par de Canciones”, he would like “two simple songs to be enough to unite us all” and he could “sing them so loud that the deaf could hear me.” Last night his great successes, compiled throughout his 35 years of a successful music career, served him to ensure a new sold out in the Starlite Auditorium and join a large number of fans under the sky of Marbella. With this concert, the most important boutique festival in Europe registers its sixth ‘sold out’ poster in the 2019 edition.

Relevant figures of the national scene such as the singers José María Cano and Francisco Javier Labandón (El Arrebato), the presenter Alejandra Prat, the TV celebrity Yola Berrocal, the music producer Joe Pérez and the Councilor for Sports of the City of Marbella, Manuel Cardeña, did not want to miss the opportunity to listen live to one of the most universal Italian artists.

The Italian singer and musician maintained a fun attitude with the public of Starlite, demonstrating that he remains the great international star capable of selling more than 65 million records worldwide. After playing ‘Estrella Gemela’ he gave away the pick he had used to rip the strings of his electric guitar. And that was just one of many winks with the audience throughout the night. He shook hands, sent kisses, wore hats with his name and sombreros that were thrown onto the stage, seconds later, handing them back with an apex of his essence.

‘Hay vida’ is the fifteenth and latest album by Eros Ramazzotti and the single under the same name was selected to open the Italian’s show at Starlite, starting a great night for the fans who gathered at the Quarry of Nagüeles. It did not matter that the songs were moving from Spanish to Italian – the native language in which Ramazzotti feels most comfortable – for a dedicated audience that enjoyed each of the songs included in the night’s repertoire.

‘Fábula’, ‘Ho Bisogno Di Te’ and ‘Terra Promesa’ preceded iconic themes such as ‘Donde Hay Música’ or ‘Cuanto Amor Me Das’, which gave way to the most intimate part of the performance. The one in which, provided only with an unplugged guitar, he sang ‘La Aurora’, ‘Huracán Meri’ and ‘Otra como tú’. This way, Ramazzotti took his audience to the most moving section of the concert, a part headed by ‘Si Bastasen Un Par de Canciones’ just before turning the Auditorium into a dance floor with the fresh and optimistic track ‘Por Las Calles Las Canciones’ and ‘Fuego en el Fuego’.

If Starlite did not exist, Ramazzotti would invent it. With ‘La Cosa Más Bella’, the hit that has given him the most joys in Spain, he finished conquering the audience: “Marbella, Starlite, thank you for existing!”

The Starlite program will continue on Tuesday, July 23, with Sting‘s concert, on Wednesday the 24th with John Legend, on Thursday the 25th, La Cantera will host Diana Krall, on Friday the 26th, the Sessions Zone will receive Don Patricio and Saturday, July 27, it will be Raphael‘s turn.