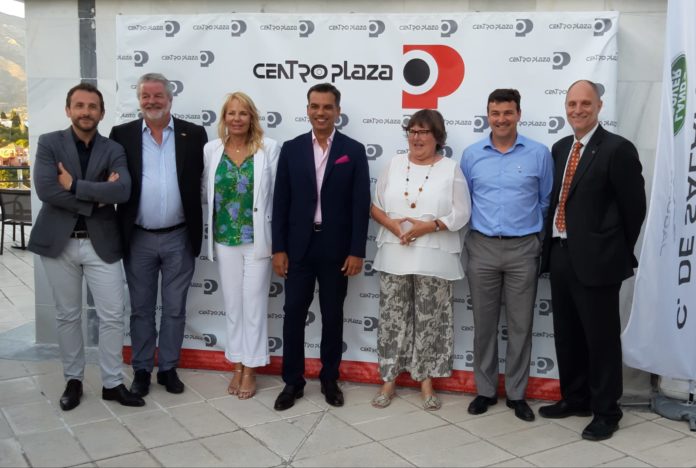 Centro Comercial Centro Plaza organised this Thursday, May 30th a round table with the Swedish Spanish Chamber of Commerce to talk about the growth in the Swedish business sector here on the Costa del Sol. Taking part in this event were some of the most prestigious Swedish entrepreneurs, such as Gabriele Scattolo, store manager at Ikea Malaga, Jim Broberg, founding partner of the real estate group Wasa, and Gunnel Bergman, owner and CEO of Gunnel ́s Zuecos/Gunnel ́s Fashion. The mediator of this debate was Mats Björkman, delegate for the Spanish Swedish Chamber of Commerce.

Carlos García, manager of Centro Plaza stated that the purpose of hosting this event was partly in response to the fact that the commercial centre has a strong international presence and that 35% of businesses there are of Swedish nationality. Furthermore, it is also due to Central Plaza’s commitment to their Responsabilidad Social Empresarial – a social commitment to the business community which helps to promote and develop synergy between businesses that operate in the Marbella area. In light of this social commitment, the collaboration and support in organising this event came from the following: Marbella Town Hall, CIT, Apymen, Club de Marketing Malaga, REM, AJE, and Apymespa.

Swedish businesses on the Costa del Sol are very diverse, however the most abundant are the SME and the self-employed. Some have been here for nearly 40 years but new Swedish businesses are continuously opening up here on the coast. In recent years there has been an important growth in the number of Swedish real estate companies, especially in those with ties to some of the most prominent Scandinavian agencies. Indirectly linked to this is the large number of law firms in Marbella that have Swedish as well as Spanish representatives. It is also possible to be treated by a Swedish medical practitioner, have lunch or dinner in a Swedish restaurant and, of course, shop in Swedish and Scandinavian stores buying the products native to these countries.

Another phenomenon that can be seen in recent years is the growth of telemarketing companies, who, attracted here by the exceptional climate and the quality of life, bring large numbers of the younger generation of Swedes to work here by telephone with the Swedish market as well as with other international ones.

Others are dedicated to import and export companies or financial businesses, not to mention the large number of business owners who, from their home on the Costa del Sol, manage and direct their businesses back in Sweden and thus make the most of the frequent and regular flights between these countries for their travel.

During the debate there were some noteworthy comments, such as the one made by Jim Broberg that “there are plenty of business opportunities available here on the Costa del Sol for Swedish nationals who want to launch a business and are keen to work, even though this area of Spain is somewhat like a rollercoaster, especially the real estate sector.” Gabriele Scattolo,for her part, highlighted the great ease that there is here when dealing with the Spanish public administration, and that thanks to this they have been able to create the “Dual Formation” in conjunction with the University of Malaga, for those students wishing to develop their professional career, giving them an opportunity to gain two years’ work experience in any Ikea store. This, of course, is closely attached to the culture, philosophy and business ethos of Sweden. Gunnel Bergman stated that for her it was important to hire local Spaniards with whom she finds it very easy to work and they are always her first choice.

The round table was full to capacity, with some 100 guests from all the different Spanish and Swedish business sectors on the coast, who were not only interested in listening to the debate and in asking the participants questions pertaining to the topics discussed, but who were also eager to take part in the proceeding networking cocktail.

The event was an opportunity to present the new Range Rover Evoque, Land Rover ́s SUV that, since 2011, has been the most sold compact four-wheel drive vehicle in the premium sector. The vehicle was presented by C. de Salamanca, whose Marbella sales team were giving away an “Evoque” weekend experience, where the winner of the raffle can try out the new four-wheel drive from this British manufacturer.