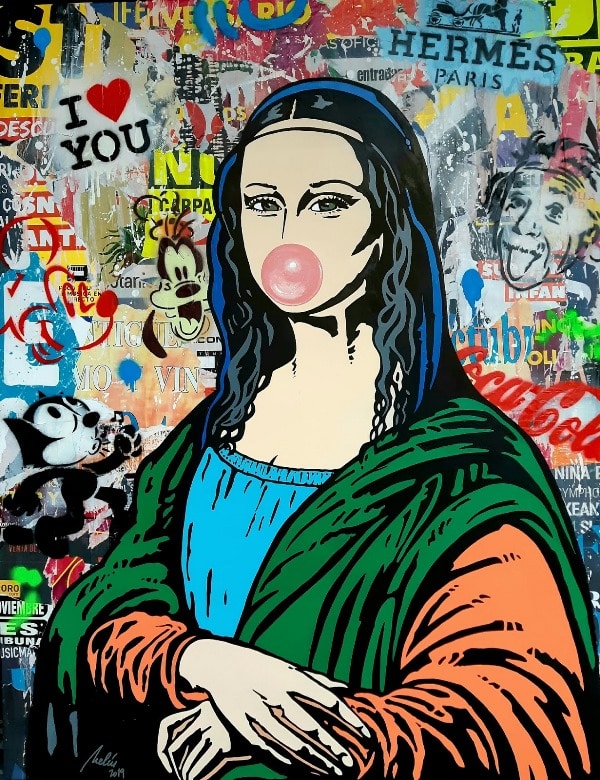 Based in Madrid, Javier Melus grew up in Navarra where, as a young self-taught and styled artist, he initially looked at his native land for inspiration. As time passed, however, he began to find himself more influenced by important artists such as Basquiat, Warhol and the ‘Equipo Cronica’.

With a fresh and street art approach, at the center of his work are images of famous pop culture icons such as Batman, Tin Tin, Scrooge McDuck, Mickey Mouse as well as television, high-fashion and consumer logos like those of Pepsi, Channel, and Louis Vuitton. Much of the elements captured in Javier’s creations bring you back to happy times, are unique and have its own genre!

“The works are visually loaded with irony, humour and ambiguity,” Javier said. “There is no specific message in them. The everyday is what is really important; the appreciator must interpret what he sees. I consider myself an urbanite, the big city offers me an infinity of stimuli, themes, data, images, scenes, etc. and I just have to put them all in order, process and translate them into my works.”

Javier works with solid materials using acrylics, sprays, collages, stencil, etc., as he aims to recreate something that resembles the hardness of a wall or a door, and he tries to make the base of all his works look like pieces of that decadent street, full of old and worn posters.

Entry to this event is free of charge and open to the public. Please register in advance by emailing marketing.estepona@kempinski.com or contact the Javier Roman Galeria, Malaga for more details on 952 22 25 33.

Kempinski Hotel Bahía, which is nestled in Estepona – Marbella, Spain, and will celebrate its 20th anniversary in 2019, is a breathtaking luxury frontline beach resort with 145 rooms (including 17 suites) overlooking the Mediterranean Sea and hotel with subtropical gardens and pools, and also features a meeting and events centre, trendy culinary concepts and an exclusive Kempinski Spa.