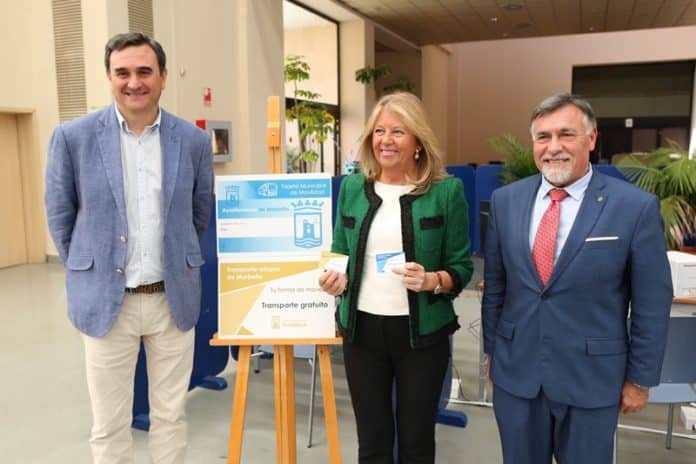 The Mobility Cards that will enable the free use of urban buses, starting May 1, will begin to be delivered on Monday, April 8. This was announced by the mayor, Ángeles Muñoz, accompanied by the councilors of Transport, Felix Romero, and Innovation, Baldomero León, who explained that applicants may collect cards from Monday to Friday, from 8.30 am to 2.30 pm, in Adolfo Suárez Fairs and Congresses Palace and in the premises next to the Mayor’s Office of San Pedro Alcántara in phases, depending on the date of application and the applicant’s first surname. The councilor has reported that so far 31,000 people have requested one of these cards, 24,000 in Marbella and 7,000 in San Pedro Alcántara.

The councilor reminded that the application for the Mobility Card, which has a differentiated model for pensioners, can continue to be submitted at any time with the only requirement of being registered in the city. “It is not limited in time. The application or the collection of the card is not suspended at any time,” said the mayor, who emphasized the procedure has been enabled “so that it can be collected with guarantees and with comfort.” In this regard, Romero has stated that the issuance of 31,000 cards is a “high level logistical challenge” and has recommended that citizens “take into account the announcements that will be made through the municipal website and recommendations.”

“If there are no incidents, some 2,400 cards a day can be issued,” he pointed out, while at the same time clarifying that the free use of buses will finally start on May 1 “so that there is no comparative disadvantage towards those citizens who receive cards later.” Regarding the operation, he explained that nine seats will be set up in the Congress Palace for the issuance of the cards, while in the offices of San Pedro Alcántara there will be three more. Thus, starting Monday, the cards requested in February will begin to be distributed to those of applicants with a surname first letter from A to L. Once these are delivered, the cards for applicants with surnames from L to Z will be issued, and, later, it will be operated in the same way but with the requests submitted in March.”

“The City will be communicating publicly on the website and social networks every phase of the process,” said the councilor, who explained that to obtain the cards users must provide ID, NIE or passport. Likewise, collective deliveries can be made to a single person with an authorization which will be available in all municipal offices.

The mayor recalled that the objective of this measure “was not only to promote public transport and that people with fewer resources could have free mobility, but also to encourage the census,” while indicating that in the months of February and March 2,200 people have been counted in the municipality, “the highest figure that has been registered in these months.” “The municipality assumes that the City has half a million euros more in terms of participation in the revenue of the State,” remarked the mayor, who has reported that they have begun the procedures to transfer lines 76 and 78, which connect San Pedro and Nueva Andalucía with the Costa del Sol Hospital, currently managed by the Junta de Andalucía, so that they become municipal property and can benefit from free access.