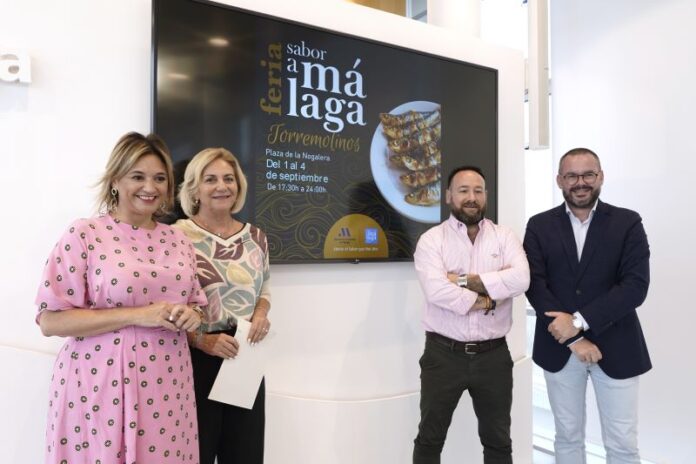 Torremolinos will celebrate a new edition of the Sabor a Málaga Fair from September 1 to 4, with the participation of 42 producers from all the regions, workshops, tastings, musical performances and live cooking by chefs from the municipality.
The first vice-president of the Diputación and mayor of Torremolinos, Margarita del Cid, has presented the program of the Fair that has become “one of the most important events with gastronomy in the Torremolinos calendar”. In this sense, she explained that the Provincial Council is working on “valuing the agri-food products of the province through these fairs”.
In this way, from Thursday the 1st to Sunday the 4th, from 5:30 p.m. to 12:00 a.m., the Plaza de la Nogalera will host the fair in which more than 40 producers from all the regions will make their selection available to the public sausages, wines, cheeses, honeys, potatoes, nuts, EVOO, olives, craft beers, pickles, chocolates and sweets, and breads, among others.
As explained by del Cid, in this edition there are more than twice as many producers as last time, “which highlights the commitment of the current government team to the agri-food sector of our province” and has encouraged the neighbors to visit the stalls and enjoy the parallel activities that will take place on stage.
As a novelty, in this edition there will be two tents for the consumption of wines by the glass, with the participation of Quitapenas, Victoria Ordoñez, Nilva, Excelencia, Dimobe, Málaga Virgen and Pérez Hidalgo.
There will also be another Victoria beer tent, which will altruistically contribute its beer to the market for the benefit of EMAUS, the Torremolinos soup kitchen; as well as an area with tables so that attendees can sit down and enjoy the gastronomy, since portions can be purchased at the sausage and cheese stalls to consume at the time.
In addition, in this edition it has been wanted to give visibility to the chefs of establishments in Torremolinos. “Neighboring chefs who, with all their love and perseverance, make the local gastronomy one more reason to visit it, assuming an extra to the tourist attraction of the town”, she specified.
Therefore, he has pointed out that there will be the presence of Juan Jovan, the chef of Uppery Club; and Cristina Domínguez, chef at the Caléndula restaurant. All will offer live cooking with the best of their menus.
From Vélez-Málaga, Mayte Sánchez, from Maychoco, will offer a tasting of her chocolates made in an artisanal way with products from the land and directly from the bean; Roberto Soler, from the Sabores de Torre del Mar cooking school, will prepare a cake with marine motifs live and the executive chef of the Starlite, Richard Alcaide, will also visit the fair.
On the other hand, Alonso, from Plantomed, from Yunquera, will give a tour on the cultivation of medicinal and aromatic plants and Mateu Argudo will offer a tasting of his innovative cheeses and local oil producers will offer a tasting of the best EVOO.
The program is completed by some experts in the agri-food sector such as Jordi Bataller or the hospitality consultant from Creamos tu Restaurante, from Torremolinos, Víctor Mendicuti; and with honey workshops, contests and tastings, local wine tastings and live music