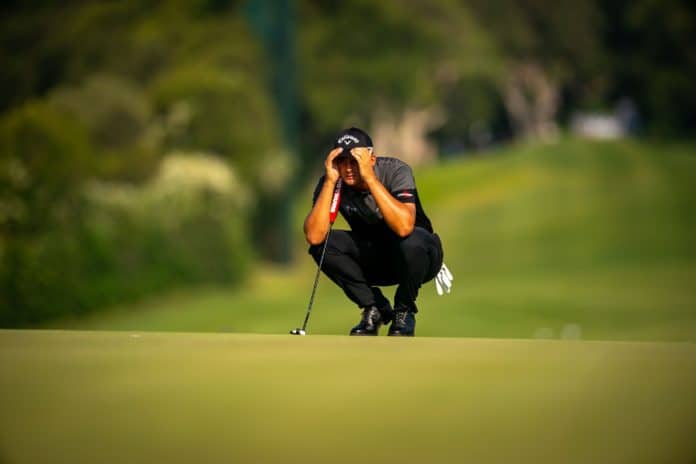 Christiaan Bezuidenhout mastered the tougher conditions during round two to take a commanding four shot lead into the weekend at the Estrella Damm N.A. Andalucía Masters hosted by the Sergio Garcia Foundation. The fearsome Real Club Valderrama had proved scoreable in round one as Bezuidenhout registered a round of 66 but firmer greens and higher winds made it a different proposition on Friday.

The South African signed for a round of 68 in the morning to get to eight under par, as he chases his first European Tour win following his third place finish at last week’s BMW International Open.

With conditions getting even tougher in the afternoon, tournament host Sergio Garcia, fellow home favourites Adri Arnaus and Alvaro Quiros, and Welshman Bradley Dredge emerged as the closest challengers at four under par.

Quiros had carded a 68 in the morning and Garcia battled to an afternoon 72 to keep himself right in the mix to win this event for the third consecutive season. He also has a victory at this event in 2011 and ten other top tens from 14 appearances at Valderrama and he delighted the home fans on the ninth as he chipped in for a birdie to go with two other gains and four bogeys.

Arnaus signed for a 70 and Dredge carded a 71 to make it a four way tie in second place, with only Brooks Koepka at the US PGA Championship holding a bigger 36 hole lead than Bezuidenhout so far on the 2019 Race to Dubai.

India’s Gaganjeet Bhullar, South African George Coetzee, Scotland’s Scott Jamieson, Finn Mikko Korhonen and Frenchman Victor Perez are all one shot further back at three under par, with 12 players in a tie for 11th place at two under par.

Player quotes
Christiaan Bezuidenhout:
“First of all I just kept it in play really nicely. That’s the key thing here, hitting fairways. I was driving it really well. On a course like this you can score well if you hit the fairways but if you don’t you can really struggle.

“I prefer the tougher conditions. It’s tough for everyone. The wind is getting quite a bit stronger, you just have to face it.

“It’s going to be tough – it’s tough without wind – so I’m just hoping to do the same, hit fairways and greens, give myself chances and see where I finish up.”

Álvaro Quirós:
“Being local, it’s always nice to play in front of my home crowd, but Valderrama is one of those few courses where you can sometimes do better if you don’t know it too well – I am starting to know every single corner for good or for bad.

“This is not a long hitter’s golf course. Most of the time we are looking to place the ball off the tee and we are not allowed to hit the driver every single time – that’s not an advantage for long hitters. I don’t consider myself at disadvantage here, but really my length doesn’t help a lot.”

Adri Arnaus:
“It wasn’t playing easy, the wind picked up and in the afternoon the greens were firmer. It was kind of a grind for most of the round until I made that eagle putt on 17, which was my highlight.

“You have to pick whenever you are going to be aggressive, definitely not all the time. I was probably aggressive five times, the rest was just keep it in play, keep it in the middle of the green and try to make some putts. If some dropped that was going to be a bonus. It was just one of those days.”

Sergio García:
“Obviously it was very difficult this afternoon, the greens were very firm and it got quite windy, more than yesterday afternoon. I just didn’t make any putts, but I felt like I played really well under the conditions and the difficulty of the course.

“The way the course is playing you have to pick your spots, there are some good spots where you can be aggressive, but you also have to be a little bit careful.

“It’s always great to play in Spain. Playing in front of Spanish people is amazing; I always enjoy it, it’s one of my favourite things, and thanks to that I’ve been very successful in Spain.”