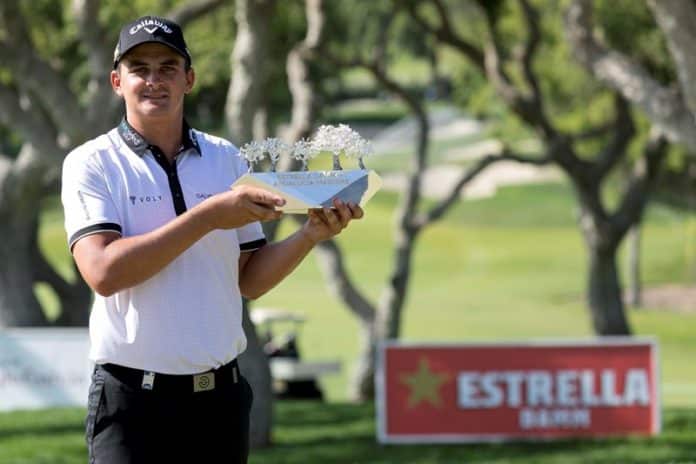 In a scenario reserved for world-class winners and against Jon Rahm, an elite rival carried around by the huge crowd gathered at the Real Club Valderrama, Christiaan Bezuindehout has premiered on the European Tour when he won the fifth edition of Estrella Damm N.A. Andalucía Masters at the Real Club Valderrama. The South African showed talent and a remarkable ability to recover by overcoming the many difficulties encountered throughout the day.

Bezuindehout did not shirk face at any time, although his first eleven holes were a real roller coaster. After starting with two consecutive birdies, the one from Johannesburg was weakening when chaining four errors in five holes and leaving the door open to his rivals. However, a worthwhile putt for par on the 8th hole served as a turning point for the round, and three birdies from that point left the tournament very decanted. In the end, he was six strokes away from their closest rivals, an eloquent and well-managed advantage that serves to confirm with a triumph the qualities that this young South African star had been aiming for the last two years.

“It has been a long day. Pinché in the middle of the round with three bogeys followed and I thought ‘I will not let it go’. My caddy kept me in the present and that was fundamental. The turning point was to save the pair in 8 because I refocused” which recapitulated the champion, who had the support of Zack Rasego, his caddy, and his family, but also the public who came to enjoy his duel with Jon Rahm. “My family has taught me to be humble in my career, they have supported me in everything and I am here thanks to them, that is why it is such a special moment. I like to play with a lot of people, and this week the public has been fantastic with me.”

Jon Rahm also had positive readings from this Estrella Damm N.A. Andalusia Masters and, in addition, congratulated Christiaan Bezuindehout for his impressive triumph. Rahm fought until the last moment, although he could not beat the Cadiz route in the final commitment.

“I’m very happy, I have not had my best day, but I’ve been tied for the second time with great Spanish players,” explained Rahm. “That moment that he has had in the 18th with his family … they are memories. Seeing the happiness of the family, what he has achieved, how he has played, you realize that there is much more than golf in this life. There are much more serious problems than doing a bogey or missing a putt.”

The host of the tournament and defender of the title, Sergio Garcia, did not give up and continued with the trend of the previous days, with an exquisite game of tee to green and uneven fortune on the well-groomed surfaces of Real Club Valderrama.

“It’s been a very positive week because of how I’ve found myself. It’s the best time I’ve hit the ball in the past year and the one that made me feel better. I’m very proud. ”

Great closure for both Estrella Damm N.A. Andalusia Masters that has received more than 40,000 spectators and that has become a great family party. The complementary activities and concerts in the commercial area have served as the icing on the cake for the golf competition in an edition marked by the incorporation of Estrella Damm as the main sponsor and the continued support of the Junta de Andalucía.

The Estrella Damm N.A. Andalucía Masters – Sergio García Foundation, tournament of the European Tour valid for the Race to Dubai that takes place thanks to the essential collaboration of Real Club Valderrama, is sponsored by Estrella Damm and the Ministry of Tourism, Regeneration, Justice and Local Administration of the Board of Andalusia, besides being co-financed with European funds. The tournament also has the support of the Diputación de Cádiz, Dubai Duty Free, Rolex, Exterior Plus, The Sotogrande Club Reserve, Santander Private Banking and Shell. Callaway, Coca-Cola, Enterprise, Raga Group, ISDIN, Korporate Technologies Group, Marca, Maui Jim, QuirónSalud Hospital Campo de Gibraltar, the Royal Andalusian Golf Federation and Volvo are official suppliers. 5J, Gadira, Grupo Joly and Varma also collaborate.