Waiting for the new edition of AnyTech365 Andalucía Open 2021 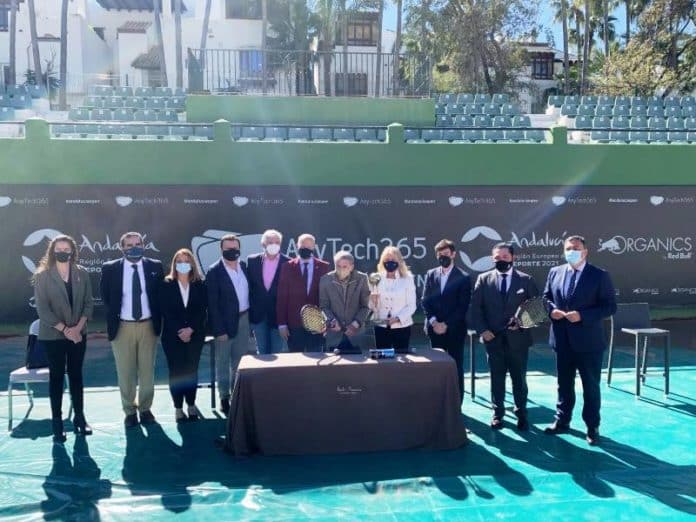 On the morning of March 22, 2021, the latest news for the AnyTech365 Andalucía Open 2021 was presented on the Manolo Santana Central Court of the Puente Romano Tennis Club in Marbella, an event that will include an ATP 80 Challenger tournament for fourth consecutive edition and a new ATP 250, for two consecutive weeks of international tennis at Puente Romano Beach Resort that will run from March 28 to April 11.

In this act, the COVID-19 protocol that will be carried out during the event was presented along with the announcement of all the television coverage that will surround the tournament.

The AnyTech365 Andalucía Open 2021 can be followed by free-to-air TV and nationwide, thanks to the agreement closed today with RTVE. Through the Teledeporte sports channel, a minimum of three matches will be broadcast daily.

The broadcasts will begin on April 2nd with three of the four ATP Challenger 80 quarter-finals and will continue until April 11th with the ATP 250 Singles Final, which represents a total of 10 days of the best tennis in the world on free to air TV. The broadcasts will start daily at 12:00 noon, playing the most outstanding match of each day not before 17:00.

In this way, RTVE keeps betting on tennis by broadcasting all the ATP tournaments held in Spain, adding the one in Marbella to those in Madrid, Barcelona and Mallorca.

On the international front, more than 100 countries will give visibility to everything that happened on the clay courts of the Marbella Puente Romano Beach Resort. Once all the agreements are closed, the complete list will be announced along with the signal that will broadcast it in each of them.