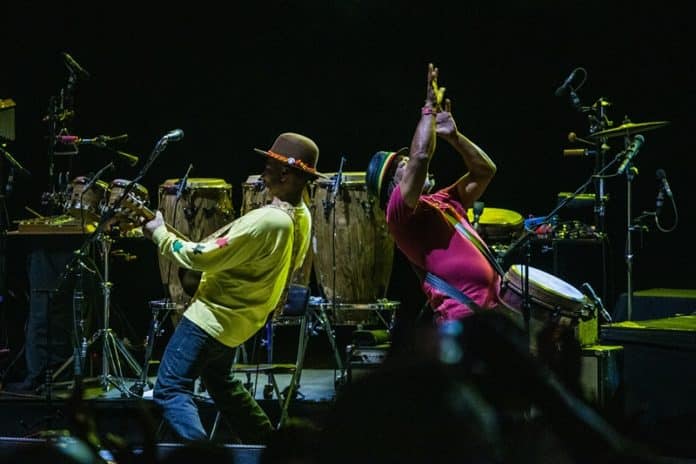 Ben Harper, one of the most prolific and influential artists on the international music scene who published a total of 14 albums in 15 years, and the band that has supported him in numerous moments of his career, The Innocent Criminals, captivated the Starlite Auditorium with a select repertoire rich in melodic rhythms and virtuosity.

The show began with Ben Harper sitting and concentrating on the strings of the weissenborn that he plays with mastery, like a stroke of caress, to sing the song ‘Gold To Me’. Already in the second song, ‘Steal My Kisses’, Harper encouraged his fans to dance in their seats. Said and done. The turning point had occurred and since then, a dedicated and enthusiastic audience supported him with their humming, applause and spontaneous shouts of ‘Ben, I love you!’ to the singer and his musicians.

Aware of the great advantage offered by the Starlite Auditorium, in which spectators and artists are separated by a small distance, the American musician said showing a fine sense of humor: “We are going to play rock, but not too loud to deafen you. ” ‘Whipping Boy’, ‘The Wild To Live’, ‘Please Bleed’, ‘Walk Away’ and ‘Amen Omen’ were the themes that represented the diversity of musical genres that Harper and The Innocent Criminals can encompass.

The composer, who has influences of soul, folk, blues, hip hop, jazz, and ethnic sounds, among others, continued the concert with ‘Forever’, ‘Burn One Down’. With ‘Diamonds On The Inside’, Harper was encouraged to sing with a hood and without a microphone, as he directed it towards the public, making it an accomplice of a magical interpretation facilitated by the exceptional acoustics of La Cantera de Starlite.

Ben Harper & The Innocent Criminals continued, as a farewell and tribute to the music that inspires them, with a great version of Stevie Wonder’s ‘Superstition’.

As a snap of the great evening lived in Starlite, Ben Harper & The Innocent Criminals closed with ‘Ground on Down’ and a more calm and thoughtful theme, ‘Welcome To The Cruel World’. This Sunday will be marked in the memory, both of his followers and those who first approached these great figures of music.

The program of Starlite will continue Monday 29, with the concert of Taburete and Trapical Minds, on Tuesday, July 30, with that of Melendi, on Wednesday 31 will be the turn of Pablo López, on Thursday, August 1, Don Omar, and on Friday, August 2, Bertín Osborne & Pitingo.