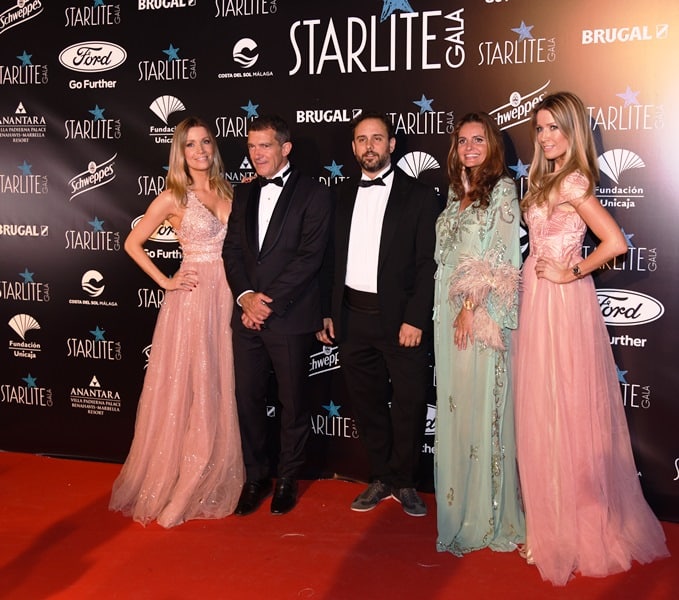 The Starlite Gala broke its collection record last night coinciding with the celebration of its tenth anniversary. The most important solidarity night of the year exceeded 600,000 euros, the highest figure since its first edition took place at the Anantara Villa Padierna Palace Hotel. August 11 will be marked as a magical night in which many dreams come true, pampered under a new star of the Leo Constellation called Starlite Gala.

On this occasion, the luxury hosts of the most important charity Gala in Spain, Antonio Banderas and Sandra García-Sanjuán, were able to gather 437 guests, among which were 97 celebrities from the cultural, social and business fields who did not want to miss the event to support and contribution to a better world, and raise funds for the foundations: Lágrimas y Favores, created by Antonio Banderas, and the Starlite Foundation, chaired by Sandra García-Sanjuán with the invaluable help of her husband, Ignacio Maluquer.

As every year, and in a more special way than ever, the Gala included exciting and touching moments, such as their traditional auction, outstanding performances and the recognition of the personalities awarded this 2019 for their fervent social commitment.

The tenth anniversary of the Starlite Gala lived moments to remember, highlighting the emotional speeches of its hosts. In the words of Sandra García-Sanjuán, who for the occasion wore an impressive Motek design, “we started 10 years ago and at this time around 3 million euros have been distributed in different social projects. Lágrimas y Favores, the association chaired by Antonio Banderas has always been an important pillar for the Starlite Foundation and without Antonio Banderas there would be no Starlite Gala and we would not be here today. I am very grateful for the effort you have made to accompany us on this special night. Antonio is one of the most supportive people I know and for him it is a responsibility to give back what life has given him, becoming a reference in Spain and in the whole world, especially in Malaga, where he is leaving a very important mark. For all this, I want to thank him for being tonight with us, not only in the name of the gala or as president of the foundation, but as a Spaniard.” García-Sanjuán conveyed his sincere thanks to “the person who helped me at the beginning of the foundation so that this could happen, Alejandra Alemán.”

Antonio Banderas also showed his emotion by highlighting the beautiful path taken together during these ten years and the great successes harvested: “The gala has delivered extraordinary results. 85 percent of the funds of the foundation that I preside, Lágrimas y Favores, received from here in the last 10 years. This gala has been institutionalized in Marbella and we have to congratulate ourselves that it serves to provide funds to those associations that carry out the projects that one day we set out to develop.”

The evening was full of special moments, such as solidarity conga. An altruistic dance on stage, with celebrities congregated by Starlite as protagonists. A funny wink that animated the night and raised a good sum of money thanks to the generosity of Starlite Gala’s friends who wanted to support the Starlite Foundation on its tenth anniversary.

Music and art were also one of the great protagonists of the night, with exceptional live interventions from friends of the Starlite Gala, also with solidarity in their hearts. The dancer Sara Baras, with her nerve and elegance, was in charge of opening the program of performances prepared for the most important charity party of the year.

Magic Pop began the list of performances with an amazing show that left the audience impressed and thinking about the tricks during the rest of the evening. The Mexican Carlos Rivera and Almerian David Bisbal enlivened the night with their masterful voice, encouraging the congregants to sing around the Starlite Gala. Bisbal sang around his table, among the people, with the sole accompaniment of a piano from the stage. Without a doubt, one of the pearls of the night. Diego Torres, one of the most beloved artists internationally, was responsible for closing the event with more success and solidarity. With a unique and encouraging performance, the Argentinian singer-songwriter and musician drew a sincere smile on the faces of the audience, who sang the chorus of ‘Color Esperanza’ with a lot of emphasis: “Know that you can, want that you can”. An emotional party weekend that was completed with a 10-level cake in tribute to each of the years the gala has worked to fulfill the dreams of the most disadvantaged. An indelible memory that will remain in memory with the rest of the night, at least, until the next Gala.

One more year, the Starlite Gala wanted to pay tribute for their philanthropic leadership to prominent figures that usually monopolize the media outlets thanks to their artistic qualities. They take advantage of their fame, influence and media power to actively help and lend their amplifying voice to those who need it the most. Support for the most disadvantaged groups through cooperation and development projects has led personalities such as Princess Marta Luisa of Norway, Almudena Fernández and Aritz Aranburu, Carlos Rivera and Diego Torres to be worthy of the 2019 Starlite Gala Award, with the awards designed and provided by Ecovidrio in recycled glass, and betting on the design with this material.

For her determination, dedication and personal involvement with different foundations in her country, Princess Marta Luisa of Norway is an inspiration and role model in the struggle for equal opportunities in many communities worldwide. A leader of the new times who is part of social transformation defending causes, creating awareness and helping people to conquer their own truth and dare to follow their heart. That is why the Starlite Gala has decided to award her on its tenth anniversary, receiving the award directly from the hands of the hosts, Antonio Banderas and Sandra García-Sanjuán.

Because of the commitment shown to young people in unfavorable situations, using sport as therapy and teaching environmental education, Almudena Fernández was also one of the winners at the gala. The founder of the NGO ‘Kind Surf’ coordinates social projects with her partner Aritz Aramburu. The sisters Barbara and Nicole Kimpel presented the award.

The ambassador in Mexico of ‘The Scholas Foundation’, whose objective is to generate an educational change in low-income communities through technology, art and sports to improve the development of children and young people, Carlos Rivera, is the third of the winners of Starlite in 2019, for being an example of solidarity in the constant search for an educational transformation that leads to tolerance, respect and peace. The award was delivered by Miguel Poveda and Loles León.

Since 2010, Diego Torres was appointed UNICEF Goodwill Ambassador and launched a public interest announcement to join the relief campaign for the victims of the earthquake in Haiti. In 2016, he joined the No Es Hora De Callar project, initiated in Colombia to fight sexual violence and, in the same year, he became the spokesperson in Latin America for the HeForShe campaign, promoted by the UN Women to promote equality. Because of his social involvement both in the natural disaster of Haiti, and in the fight against gender inequalities and stereotypes, Diego Torres is the fourth of the Starlite Gala winners as a symbol of tireless work for the empowerment of women in Latin America and the world. Award was presented by Bettina Bulgheroni and Vanesa Romero.

AN AUCTION FULL OF EMOTION, ART AND EXCLUSIVE EXPERIENCES

Unrepeatable and unique moments flow in each edition of Starlite Gala. The auction is no exception, given the exclusive nature of the products that are submitted to the bid during the evening. The traditional Gala auction on its tenth anniversary featured an honorary presenter. The television star Luján Argüelles was responsible for providing emotion this raffle, in which attendees have had exceptional experiences and pieces at their fingertips. Among them, they have highlighted an exclusive trip to Florence that includes the making of a tailored suit of the prestigious Italian luxury brand Lardini, a Ford experience, various health and beauty plans such as the one given by the center of Maribel Yébenes or wonderful works of art by authors such as José María Cano, Bibiana Domit, Blanca Cuesta, Roberta Lobeira or Elisabeth Olle.

The strongest bid of the night was lived with the auction of the painting by José María Cano, which matched the record of 2017, reaching 270,000 euros. José María is currently exhibiting his paintings at the San Diego Museum of Art, in dialogue with an exhibition of the Spanish Golden Age with Velázquez, Zurbarán, Murillo and other classic painters. The winner of the lot will have the honor of being portrayed by José María Cano, a privilege only available so far from the Spanish art collector, Juan Antonio Pérez Simón.

Among the curiosities of the bid, the fantastic bike personally chosen by Antonio Banderas is to be auctioned. There are only two copies of this model in the world: that of Antonio Banderas and the one auctioned at the Starlite Gala, distinguished with the signature of the actor from Malaga.

The Starlite Foundation is the social work of the Starlite platform, whose mission is to improve living and health conditions, and promote the education of disadvantaged children, families and communities without resources at risk of exclusion. To achieve this, we have the support of important businessmen, personalities and artists with a solid social commitment, who make available their fame, influence and media power to actively help those who need it the most. The Starlite Foundation holds a night dedicated to philanthropy annually, the Starlite Gala, hosted by Antonio Banderas and Sandra García-Sanjuán and this year celebrates its 10th anniversary.

The Starlite Gala was born in 2010 to raise funds for charitable causes, mainly for the Foundations of the hosts, Lágrimas y Favores, created by Antonio Banderas and Starlite Foundation, chaired by Sandra García-Sanjuán. The Gala is supported by the well-known personalities from the cultural, social and business fields, both nationally and internationally. The Gala is financed by sponsors and 100% of the funds raised go to the supported foundations. Throughout its previous editions, Starlite Gala has raised more than two and a half million euros that have been distributed among projects of dozens of foundations. Its reputation is such that in 2016 it celebrated its first edition in Mexico with an overwhelming success.

Photos from the event are available at our Facebook page.