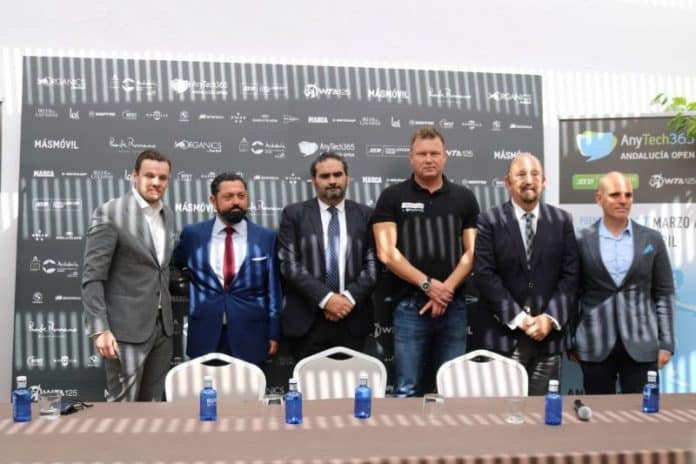 The latest news for the tennis tournament, AnyTech365 Andalucía Open, was presented at a press conference in Puente Romano Beach Resort in Marbella.

The press conference was among other attended by the Secretary General for Sports of the Junta de Andalucía, Mr. José María Arrabal; the Councilor for Sports of Marbella, Mr. Manuel Cardeña; the Director of Puente Romano Beach Resort, Mr. Gonzalo Rodríguez; the founder and CEO of AnyTech365, Mr. Janus R. Nielsen; the President of the Royal Spanish Tennis Federation, Mr. Miguel Díaz; and the tournament director Mr. Florian Leitgeb.

The celebration of AnyTech365 Andalucía Open will take place this Sunday between the 27th of March and the 3th of April at the heart of the Golden Mile of Marbella at Puente Romero Tennis Club. This will be the 5rd edition of the ATP Challenger 125 and for the first time a new WTA 125, a women’s tournament.

This year there will be a high-level of tennis players. Already now 10 of the players from the men’s tournament, ATP Challenger 125, are within the top 100 players in the world. Among others Pablo Andujar, Alex Molcan and Holger Rune. Furthermore, it was announced at the press conference that the former world number 3, Stan Wawrinka, has confirmed that he will participate in the tournament. In his almost 20 years professional career he has achieved almost every possible milestone in professional tennis. Stan Wawrinka won three Grand Slam titles, 16 ATP titles and an Olympic gold in Beijing with Roger Federer in the men’s doubles category.

In the WTA 125 tournament 16 of the players are within the top 100 players in the world, among others Alison Van Uytvanck, Arantxa Rus and Anna Karolina Schmiedlova.

Another topic was the question about expectations for AnyTech365 Andalucía Open in the future. Here Janus R. Nielsen, the main sponsor, made it clear that this tournament is important for Marbella and therefore he wants to continue trying to bring this tournament forward and even try harder to bring more sponsors to make it a bigger event.

You can buy tickets to the tournament here.