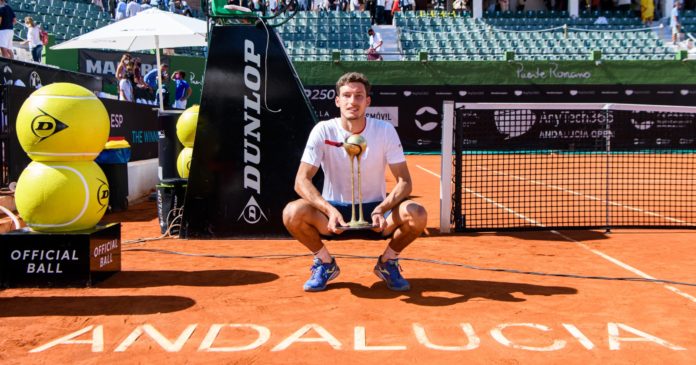 Pablo Carreño is the AnyTech365 Andalucía Open ATP 250 champion. No. 1 Top Seed has beat Jaume Munar by 6-1; 2-6 and 6-4 in two hours and twenty minutes. He earn the 5th title of his career and his 200th tour level win. He will be 12th FedEx ATP Rankings world rankings this Monday.

The third and decisive set was a tough battle. 4-4 on the scoreboard and Carreño broke Munar’s serve. He served on the next game and won the trophy. He become the first Spaniard to capture an ATP Tour Title in 2021.

The AnyTech365 Andalucía Open closes its first ATP 250 edition with several notable milestones: youngest ATP Tour semi-finalist since 2014 (Carlos Alcaraz), first time in 17 years four players from the same country are in the semi-finals of and ATP Tour event and first Spaniard to capture an ATP Tour Title in 2021.

AREIL BEHAR AND GONZALO ESCOBAR RAISE THE TITLE IN DOUBLES

The couple formed by the Uruguayan Ariel Behar and the Ecuadorian Gonzalo Escobar were proclaimed doubles champions of the AnyTech365 Andalucía Open after beating Bosnian Tomislav Brkic and Serbian Nikola Cacic. The American couple took revenge for the final lost to the same opponents in the last tournament in Buenos Aires, this same month of March.

The match played on the center court Manolo Santana closed with a score of 6-2 and 6-4 for Behar and Escobar in a perfect week for both. With this ATP 250 tournament they add a new trophy to their showcases that joins the one achieved this same season in Delray Beach and the 7 ATP Challenger they have added during their career together.