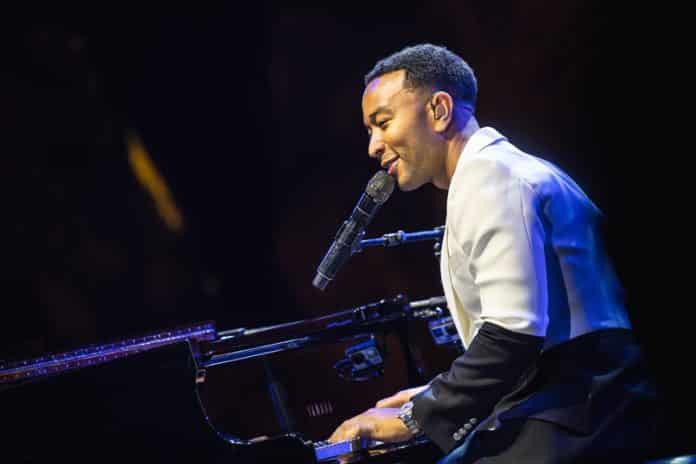 The eighth edition of Starlite is a box of surprises in which every night is a new opportunity to overcome the previous one. And last night it happened again. The sublime John Legend took the stage and, from the first second, gave a unique experience to his spectators who, in an especially respectful manner, witnessed an hour and a half of excellent piano performance. A concert of these characteristics could not be less than a sold out. And with it, Starlite recorded its eighth ‘sold-out’ of the promising 2019 season.

At the meeting with the most critically acclaimed artist, there were prominent figures such as Princess Ingrid Alexandra of Norway, the daughters of Princess Alia of Jordan, Sara and Aisha; the singer Victoria Swarovski and the former president of the Real Madrid Club de Fútbol, ​​Ramón Calderón, who enjoyed the best festival of night Marbella.

With the rock of La Cantera as a backdrop and subtly lit to highlight its beauty, John Legend was greeted with sincere ovation after which the concert began splendidly versioning the song of The Beatles ‘Here Comes The Sun’. Dressed in a suit and two-colored pants – white and black – he sat down in front of the piano and, without more company, he delighted the Starlite Auditorium on one of the most romantic nights ever recorded for remembrance.

“Hello, Marbella, welcome! Thank you for bringing me here to a beautiful place. We will spend a beautiful night at Starlite,” announced the singer and songwriter who has ten Grammies, among other important awards. And it was a magical evening with love as the only protagonist. Topics like ‘Made To Love’, ‘Love Me Now’ or ‘Stay With You’ which, as he explained himself, he interpreted at his own wedding; there were chants from the hearts of each spectator.

“Sometimes we forget to say I love you, so tonight we are going to do it. It is nice to hear it and it is also good to say it,” said a generous and charming John Legend who, with an indelible smile on his face and the dimples that frame it, managed to make the audience participate in the songs, willing to sing hand-in-hand with the musical idol who also won an Oscar.

And so, with an unwavering concentration and a voice that pierces the soul of the listeners with each pronounced syllable, the most anticipated moment of the night arrived. Not before telling his beginnings in music and the journey experienced until releasing his first album ‘Get Lifted’, whose theme of the same name he sang next. The final ecstasy was a result of the well-known ‘All Of Me’, a hit that John Legend and the Starlite Auditorium half sang because, although written by the American artist, the song is already a part of each of his fans.

Starlite’s programming will continue today, Thursday, July 25, with Diana Krall‘s concert; on Friday 26, the Sessions Zone will receive Don Patricio, on Saturday, July 27, it will be Raphael‘s turn, on Sunday 28 the one of Ben Harper & The Innocent Criminals and on Monday 29, the one of Taburete.

Maserati announces plans for all-new models to be developed, electrified and produced in Italy

MARBELLA DESIGN prepares its second edition with a renewed philosophy and...