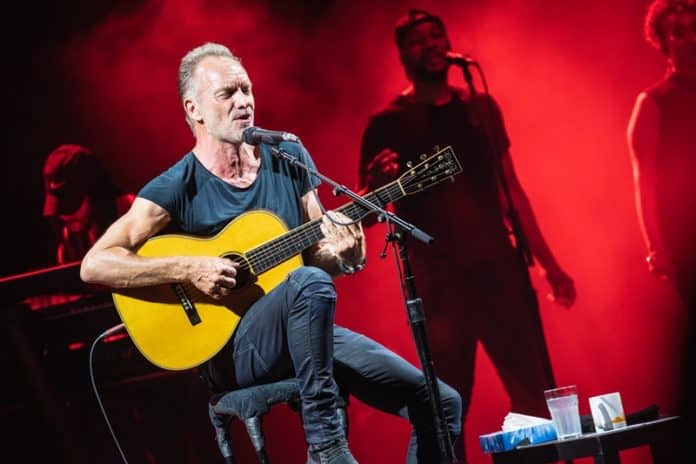 Sting stands for magnetism. Even when he goes on stage moderated by a recent throat condition. The British artist returned to Starlite for the second consecutive year with a sweeping attitude that did not leave the audience indifferent, making it excited that he re-recorded a new sold out of the festival. Go seven, data that foreshadows a promising eighth edition of Starlite.

Personalities from the world of music such as María del Mar Rodríguez (La Mari de Chambao) and producer Joe Pérez-Orive, the humorist Dani Mateo, the former president of the Real Madrid Club de Soccer, Ramón Calderón, and the Councilor for Sports of the City of Marbella, Manuel Cardeña, did not want to miss the opportunity to listen live to the former member of ‘The Police’ that has sold more than one hundred million albums.

“I am happy to be here for the second time. I have been out of combat for a couple of weeks and I have had to cancel some concerts, but I do not want to cancel more, so I will make a concert a little different and quieter, easier for my voice,” the artist explained just before starting the performance with the song ‘Roxanne’, by ‘The Police’, the British trio in which he took his first steps as a singer back in 1977.

Wearing an enviable physical and vocal form, Sting was channeling the great successes such as ‘Message In A Bottle’, ‘Brand New Day’, ‘Fields Of Gold’, ‘Break Of Day’ or ‘Shape Of My Heart’. “Sing with me, please,” the singer asked his fans, faithful to the requests of the 16-time Grammy winner. With ‘Englishman In New York’ – and a suggestive swinging of the hips – Sting put the audience in his pocket. And even more … he put them to dance with ‘So Lonely’, ‘Desert Rose’ and ‘Every Breath You Take’ right at the height of the night .

Sting is a detailed, tireless seeker of perfection in his songs. And that quality was reflected in his interpretations, which rallied throat problems with great talent during the entire show in which the artist interspersed energetic moments with sweeter ones.

For the encore, he booked ‘King Of Pain’, ‘Next To You’, ‘Russians’ and ‘Fragile’. Undoubtedly, Starlite lived an unforgettable experience last night, a high-class concert of great stars who do not hesitate to say goodbye by shaking hands, thanking the respectful attitude of the public and with the hand over the heart to express that for Sting also the Starlite night has been special.

Starlite’s program will continue today, Wednesday 24, with John Legend, on Thursday 25 the festival will host Diana Krall, on Friday 26, it will receive Don Patricio, on Saturday, July 27, it will be Raphael‘s turn and on Sunday the 28th Ben Harper & The Innocent Criminals will perform.

Countdown for the first event on space tourism in Spain

The 2019 Gala of the AECC of Marbella announces record figures...